George and Amal Clooney are Expecting…..Twins!! 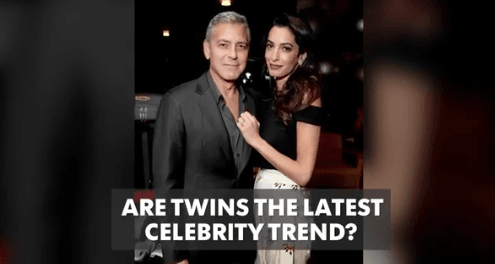 That’s right! the celebrity couple, who married in September 2014, will soon become parents come June. And to not just one, but TWO babies. George, 55, and Amal Clooney, 39, are expecting twins, according to The Talk’s Julie Chen who had this to say on the daytime program.

“Beyoncé is not the only superstar expecting twins. Congratulations are in order for George and Amal Clooney!”

Amal “has let everyone in both families know quietly,” says a source close to the couple. “They’re all very happy.”

“Between all their important work, they always stay focused on keeping their marriage happy and healthy. They are very keen on not spending too much time apart.”

And according to USATODAY,

Twins will make a family of four for the glamorous couple. Clooney, who once swore he’d never marry again (he was married to actress Talia Balsam from 1989 to 1993) or have children of his own, met the Lebanese-British human rights lawyer in 2013, and the actor stunned the world when he traded in his bachelor status after proposing to Amal in April of 2014.

Baby rumors have followed the Clooneys since they tied the knot. In 2015, Clooney joked to USA TODAY about the tabloid brouhaha about whether the couple would or won’t have little ones. “We are having triplets,” he riffed at the time. “We’re going to have four, actually.”