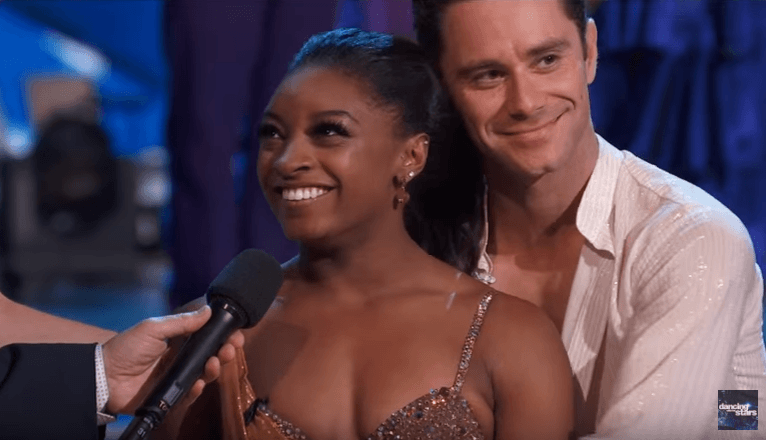 After 2 perfect scores, Simone Biles went home on Dancing With The Stars last night – so she will not be in the finals next week.  Some believe it was a voter backlash that sent her home, after she snapped at Tom Bergeron last week.

Simone Biles dropped the classic line, “Smiling doesn’t win you gold medals,” after Dancing with the Stars host Tom Bergeron asked her why compliments on her dancing didn’t make her smile.

The internet went slightly crazy after she said this, and Bergeron noticed.

Loved @Simone_Biles crisp response to my clumsy question. Curious how she felt about judges comments, I unwittingly added to the smile pile.

But at the end of the show, Simone was the one to be sent home. Her elimination comes as one of many shock eliminations this season. After Heather and Nancy’s departures, it was almost certain that Simone would make the final considering her place in the final four. But half of the decision relies on America’s vote, and even after a perfect 80 from the judge’s, David Ross’ votes outweighed Biles’.

For die-hard fans, it’s reminiscent of Brandy’s exit back in season 11. The only formidable option to take out fan-favorite Jennifer Grey, Brandy left in the final four after a near-perfect run on the show. The science and math of DWTS? Well, it just doesn’t make sense sometimes.