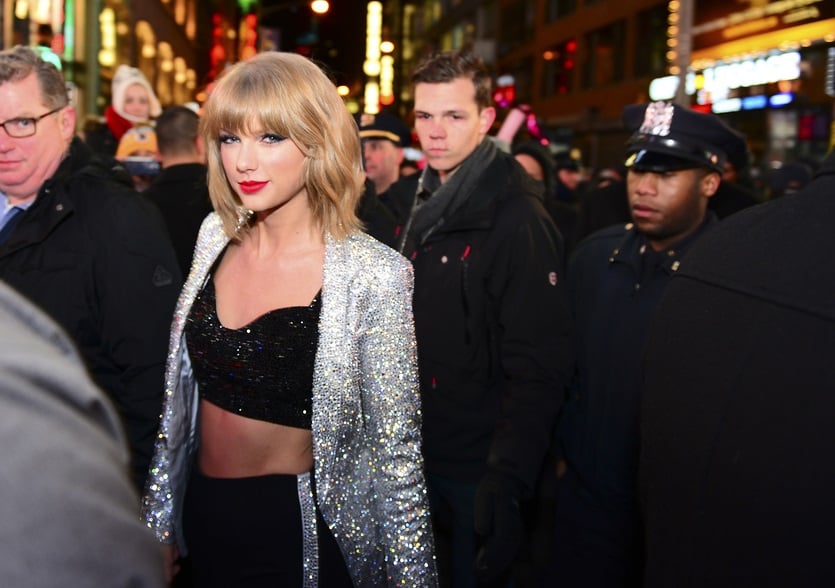 Jodi shares this Hollywood Outsider at 14:40 minutes into today’s show podcast below.

CLICK HERE to hear the hilarious questions potential jurors were asked on Tuesday for the legal battle!

According to BBC NEWS,

Ms Swift, 27, accuses broadcaster David Mueller of slipping his hand under her dress while they posed backstage together at one of her 2013 concerts.

Her lawyer said in his opening statement at the court in Denver, Colorado, that Mr Mueller had “grabbed her rear end”.

Ms Swift – who was in court on Tuesday – countersued a month later, saying what occurred at the city’s Pepsi Center was assault and battery.

On Tuesday, jurors were shown a photograph of the alleged assault at a VIP room meet-and-great before the gig on 2 June 2013.

In the picture, Mr Mueller and his then-girlfriend, Shannon Melcher, stand with Ms Swift in the middle.

All are smiling, and Mr Mueller’s right hand is hidden behind the Shake it Off singer.

Mr Mueller’s lawyer, David McFarland, said in his opening statement the image shows his client’s hand “is not underneath Miss Swift’s skirt, and her skirt is not rumpled in any fashion”.