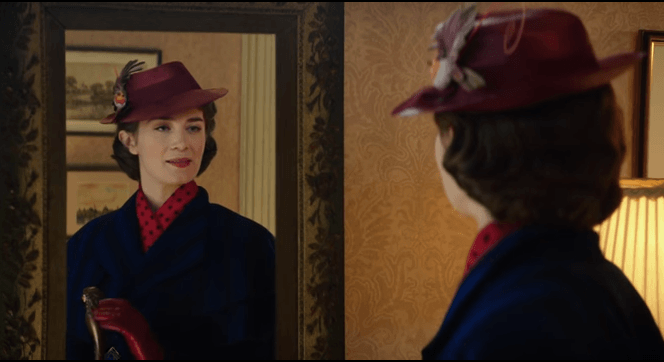 Have you seen the Mary Poppins Returns trailer?  “It’s Practically Perfect in every way!”  -Jodi

The gang talk all about the upcoming film in Jodi’s Hollywood Outsider from the show podcast below. [starting at 30:38

According to the New York Times

The clip doesn’t give away much, but we do get to see Emily Blunt as the titular nanny as she floats down from the sky on a kite, and Lin-Manuel Miranda riding a bike and looking an awful lot like Dick Van Dyke’s chimney sweep from the original 1964 musical. Mr. Van Dyke also appears in the new version in a different role, as the son of the penny-pinching banker Mr. Dawes.

“Mary Poppins Returns” reveals a grown-up Jane and Michael Banks (Emily Mortimer and Ben Whishaw), who reunite with their magical caregiver in Depression Era London, 25 years after the first film took place. “It’s wonderful to see you,” Michael tells Mary, to which she agrees, “It is, isn’t it?” We shall see if moviegoers feel as equally supercalifragilisticexpialidocious when the new “Poppins” lands in theaters on Christmas Day.

After the Show: Have you ever met someone you KNEW you could be instant friends with?!   It’s exciting!  -Jodi